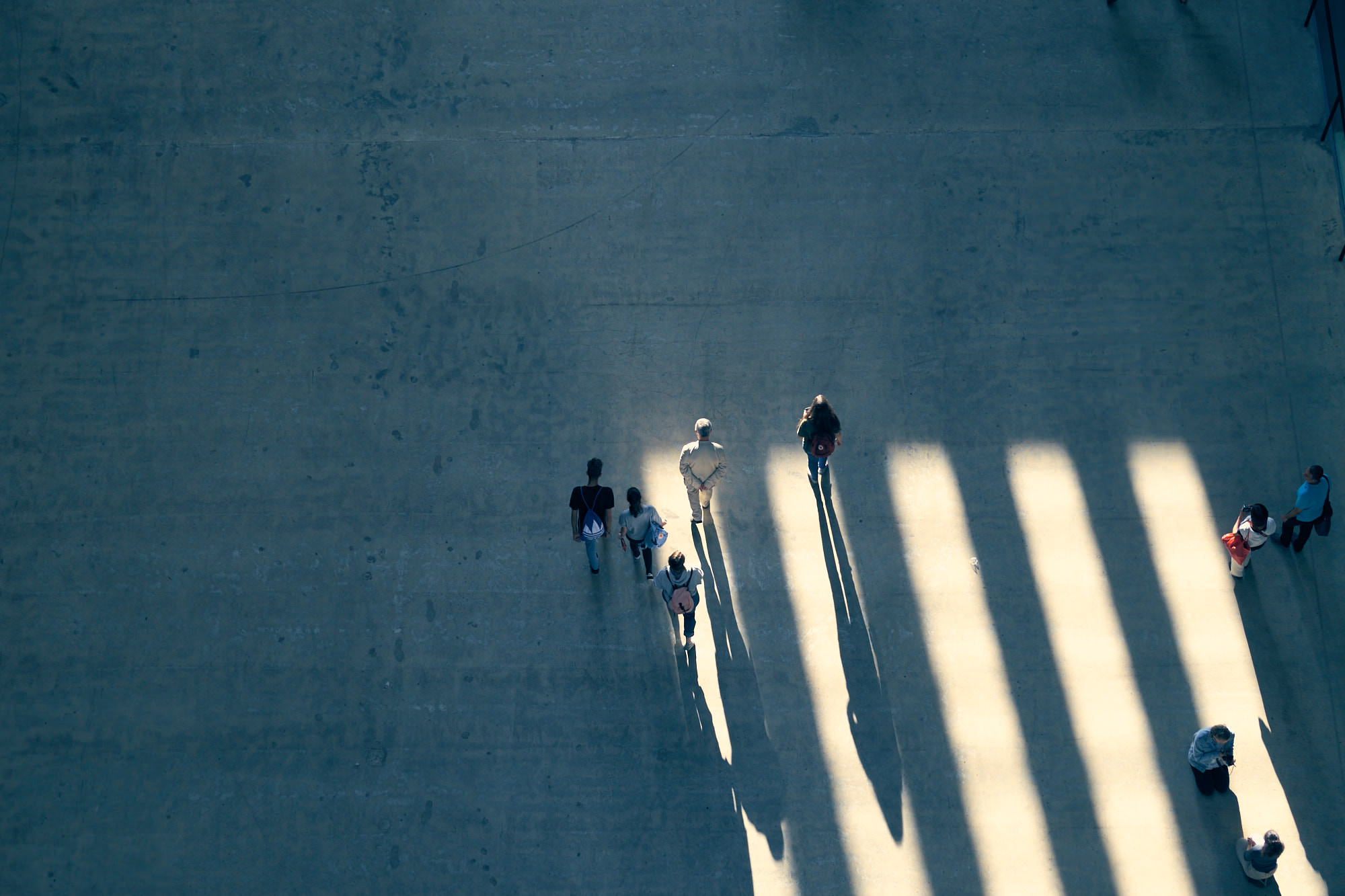 When I re-joined Instagram few months ago after a five years long gap, I didn’t know exactly what to expect. I started following people randomly, according to few mostly unconscious rules: contrasty black and white (or interesting use of colour), urban/street photography, good composition and geometries. In less than one month, I had unwillingly selected most of who are still among my favourite photographers – not just on Instagram but generally speaking: people I now follow on other social media, whose personal website I’ve browsed and for whom I’d book a plane ticket to attend an exhibition. In this, Instagram was indeed a surprise.

The very first one of these people was Craig Reilly.

After him, it was a matter of days before I discovered the rest of the Street Photography International Collective (→ website): Alan Schaller, Walter Rothwell and, last but not least, Emily Garthwaite. And it was love at first sight.

After my first timid attempts at street photography last Summer – at the cost of an incredible amount of stress – I retreated to more comfortable experiences. It was an interesting year but my push was fading, comfort was increasing too much and as a result I fell in total lock down. I needed a spark and couldn’t find any. In the meantime – as I often do when I’m in lock down – I kept devouring images (and, inevitably, SPi photos).

When I discovered that a workshop was planned in London for those very days when I was supposed to be around, I joined immediately. I’d never attended a workshop before (nor I received any “formal” photography education) and I tend to be uncomfortable in unpredictable social situations: joining was an impulse, an internal voice telling me: you need to catch this train now.

Here is how it went, why this was the best thing that could happen to me and why you should really keep an eye on their next workshops.

I reached the place designated for our meeting on a sunny Saturday morning. Half of the group was already there, the other half slowly built up during the following thirty minutes. In the meantime, we were warmly welcomed by Alan, Craig, Emily and Walter and had the opportunity to have a chat with them and with each other. For someone who – as I wrote – isn’t usually at ease in these situations, it was extremely simple to fit in and get comfortable. The group was mixed in every possible way but well-matched, the setting was friendly, we were served coffee – but the truth is that it was clear straightaway we were being received by people willing to share. As such, they were open, kind and welcoming not out of politeness but as an inevitable by-product of their approach to photography (but more on this later).

After coffee, we regrouped at the Classic Camera where we were briefed about the day and divided into four groups of four-five people, each one assigned to one photographer. Groups would rotate at each stop, in order to work with all members. We were four.

I knew this was coming and I was prepared. Emily’s topic was talking to strangers, asking permission, taking portraits to subjects aware of us doing it. Even in candid shots, she invited us to keep eye contact and resist the urge to vanish in the crowd. I was prepared because this is my weakest point and I came with a full luggage of ready-made excuses – that of course seemed absolutely trivial at the moment. I’m very good if I need to prove a point, Emily just steered away from that level and pushed me into another one: she helped me to keep easy things as they are – easy – instead of overcomplicate and overthink. She didn’t do so by merely giving instructions, directives, assignments: she just showed us how she does it and was there while we were doing it, backing us up, motivating, smashing self-judgment. In my case, specifically, she almost physically dragged me to take a portrait.

This was the hardest task for me and I was lucky to start with it, otherwise I would have been thinking about it the whole day. Moreover, overcoming this issue was a good boost in confidence.

When it comes to street photography, street portraiture is not among my preferences: nevertheless, when I went out alone few days later I felt more comfortable and completely at ease in taking pictures of strangers (something she predicted while I was babbling excuses). And if an interesting opportunity arises, I now will take a street portrait.

Craig asked us to focus on composition: we explored the possibilities of a crowded staircase. Among all, this was the part I felt more confident about and, as a result, it’s the only part where I couldn’t get a decent picture (touché!). Craig taught me to look over the contingency: work the picture anyway, even if it’s not the right time, the right light, the right situation. While you are exploring, a good picture may come along the way, but if it doesn’t you can come back at another time in the day (or in the year) and take the picture that you already know is there.

And, of course, you need to move around.

Craig on a staircase (and later Alan at the Tate) helped me to extend my perception of (street?) photography: it can be extemporary, but it can also emerge from a deep knowledge of an environment. In SPi’s photo is apparent how some shots are the result of catching an opportunity on the fly while others are the effect of a long and patient work on a single spot.

As we were on the move we left early our exploration spot, but a long chat followed and more of SPi’s philosophy naturally emerged. I learnt from chatting with Craig as much as I learnt from his photos. Seeing him in action – taking a picture he just couldn’t let go – was also a revealing moment. I discovered that often I was able to see and perceive what SPi members were finding interesting, but they got the picture and I didn’t (too slow, too shy, undecided…). I overthink and contemplate, they press the button.

I don’t know how was the experience with Walter for the other groups, but I think that he and a crowded South Bank are a perfect combination.

It’s hard to put in words how intense and formative was this part of the Workshop, maybe because his approach is the one I feel closer to. I’d summarise it like this: take your time, enjoy the walk, don’t give up trying if you have a scene that repeats itself (like people playing football, skating, dancing…), wait, be patient, don’t rush.

We were shooting from the hip while on the move and at eye level during the many stops for the most interesting or even (what I would have thought) uninteresting scenes: I wouldn’t stop for giant soap bubbles, I considered the scene too obvious. Some pictures of it by other members are among the best ones of the day. The lesson here is: don’t discard your options out of laziness.

The Tate Modern Gallery is one of my favourite places in London: visiting it with Alan just blew my mind off. I thought, again, geometries were one of my strongest points: Alan just sees things where I see nothing. I saw him taking a picture in front of me and still what was in the camera was nowhere to be found with my naked eye.

Know the environment, the light, the place, work your angle, look for it, explore and – again – be patient (and curious). Change point of view, position, go to the basement or up to the roof.

“Tate” and “Alan” was another very lucky match.

I must say I had seven teachers in this workshop, not just four. I learnt from the rest of the group a lot (Huw’s confidence and charm, M. C.’s curiosity and openness, Alicia’s talent and bravery – and the amazing photographic qualities of all of them) and for this I am very grateful. They all have been role models, each one in his or her own way.

I’d think this was just blind luck, but from what I could see this workshop was attended by extremely interesting, talented and nice people. With some of them I had the chance to talk a bit more on the fifth, unofficial leg (from Tate Modern to the pub).

I had special needs and peculiar ways of learning. It might sound absurd, but my purpose wasn’t to came home with good pictures (which I unexpectedly did, by the way). Nor was it to come home with new techniques. I was looking for an experience, for a way to overcome a couple of blocks, and the only way I really learn is by watching. I accomplished all these goals.

I don’t think the other members were all looking for the same things but at the end of the day we were all on top of the world, so I guess each one of us found what he or she was looking for. And the reason for this might be what follows.

Alan, Craig, Emily and Walter share – while in their differences – a style, a modus operandi, for some traits also an aesthetic. But what is really valuable here is their vision: an always respectful relationship with their subject, an openness to wonder, a photographic “touch” that is at the same time delicate and profound. They are all remarkable photographers, but the “human factor” was the real deal of the day.

This is true on many levels:

When you “own” some skills or some knowledge, this is your power and you hardly give it up or give it away. When you have access to beauty, you just want other people to have this access too.

There is a remarkable difference.

My best shots for the day are on this page. SPi started a flickr pool; some pictures are also tagged on Instagram with #SPi_Workshop. Information about SPi workshop on streetphotographyinternational.com.